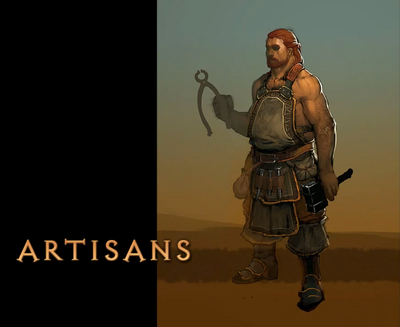 Artisans are a new type of NPC that will appear in Diablo III. Players will be introduced to these NPCs as they progress through the main quest line of the game. The player will be able to obtain Artisans by completing quests for them and earning their trust. Once an Artisan has joined the player, they will make camp at the nearest town, and will follow the player throughout the various acts. There are three different Artisans that the player will encounter throughout their journey: The Blacksmith, The Mystic, and The Jeweler. The three Artisans will offer you various services as well as gossip and dialogue. All Artisans have the ability to craft items, and act as vendors who buy and sell items to the player as well. Each Artisan possesses different specialties, and the services that each offers are defined by those individual talents. 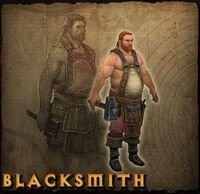 The Blacksmith sells and crafts weapons and armor that will most likely cater to melee classes: plate mail, chain mail, shields, swords, axes, etc. The Blacksmith's wagon will feature a rough, sharp aesthetic made up of wood and metal. He will also offer a few extra services: 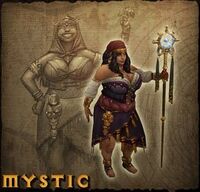 Axes enchanted with Frost and Lightning, as seen in the original gameplay trailer from Blizzcon'08

The Mystic sells and crafts items that will be used by the caster classes, such as staves and wands, and can probably create some magical armor as well. They also create scrolls, Runestones, charms, and potions. The Mystic also provides the unique Enchanting service for your character and will Identify items. The Mystic's wagon will be rounded with natural, organic shapes. 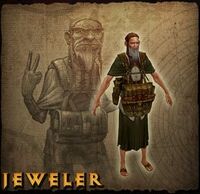 The Jeweler deals in precious jewelry; namely amulets, rings, and gems. The Jeweler's wagon boasts an especially ornate look, as his jewels are more difficult to display than the other Artisans' goods. The Jeweler will provide the player with special services involving gems: 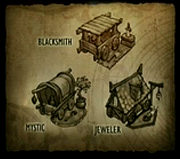 Concept art for the Artisans' wagons

As Artisans craft items and provide services, they will increase their skill, and eventually level up. As an Artisan increases in level, they will gain the ability to craft more items of increasing power. Their increased prowess will also be reflected by a visual change to the Artisan's shop. It has been suggested that eventually Artisans will be able to specialize in different areas, such as the Blacksmith specializing in Swordsmithing or Axesmithing. There's no need to choose which artisan to develop or focus on. Given enough time, all three can be developed fully. All three artisans will be optional to use; if the player doesn't want to craft, there's no need to. Crafting merely provides the player with another venue through which they can acquire items.

The materials needed for crafting will be acquired primarily through a system called Salvaging. Items that the player finds but has no use for can be salvaged and converted into raw materials that can be provided to the Artisans for use in crafting. The crafting materials will take up much less space in the player's inventory than the items themselves, and will be stackable, thereby reducing the frequency that a player will need to return to town to clear out his inventory. Once an item has been salvaged, it will be destroyed and is not capable of being obtained again. Salvaging will be made possible by an Artifact called the Nephalem Cube that players will come across while proceeding along the main storyline. The Nephalem Cube will not take up a player's inventory space.

The variety of crafting materials obtained through salvaging is currently unknown, though at least four could be seen in the crafting system trailer. In general, higher-quality items will provide you with more valuable and rarer salvage than lower-quality items -- but the rarest materials are always found in treasure chests or beside the corpses of your foes. It has been stated that lower quality materials will not be required for high level crafting. Therefore, in order to level your Artisans' skills, you will be required to progress your character into the higher difficulties of the game as well.

There are two means by which Artisans will be able to learn new crafting recipes: leveling and drops. The higher a particular Artisan's skill is, the more recipes they will be able to provide. In addition to this, many of the best recipes in the game will be obtained as random world drops from monsters, which can then be taken to the Artisan to learn. Crafted items will feature a number of pre-set bonuses, but will also come with a variety of random bonuses when created. Lead game designer Jay Wilson has said that the crafting system is a sort of evolution and combination of several systems present in Diablo II, namely runewords and gambling.