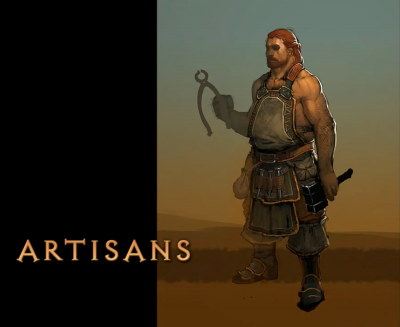 Artisans are a type of NPC that was first introduced in Diablo III. As players progress through the main quest line of the game, they will meet and obtain these Artisans. Once an Artisan has joined the player, they will make camp at the nearest town, and will follow the player throughout the various acts. There are currently two different Artisans that the player will encounter throughout their journey: The Blacksmith, and The Jeweler (The Mystic was removed during development).[1] The two Artisans will offer you various services as well as gossip and dialogue. Each Artisan possesses different specialties, and the services that each offers are defined by those individual talents. 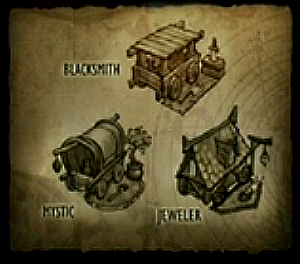 Concept art for the Artisans' wagons

Artisans can be leveled up as a part of training, which firstly costs only gold and later also Pages of Training. As an Artisan is trained, he will gain the ability to craft more items of increasing power. Furthermore their increased prowess will also be reflected by a visual change to the Artisan's shop. There's no need to choose which artisan to develop or focus on. Given enough time, both can be developed fully. Artisans will be optional to use; if the player doesn't want to craft, there's no need to. The only exception to this rule is gems of tier 6 or greater, as the highest tiers of gems are only obtainable through crafting. Crafting merely provides the player with another venue through which they can acquire or upgrade items.

The level of the Artisan is retained across all characters. Whenever you unlock an artisan for one character, it will be available for all your future characters on the same level and with the same recipes from the start of the game.[2] Artisans are however separate for Softcore and Hardcore modes.

The materials needed for crafting will be acquired primarily through salvaging. Items that the player finds but has no use for can be salvaged and converted into raw materials that can be provided to the Artisans for use in crafting. The crafting materials will take up much less space in the player's inventory than the items themselves, and will be stackable, thereby reducing the frequency that a player will need to return to town to clear out his inventory. Once an item has been salvaged, it is destroyed indefinitely. Salvaging was made capable by the Nephalem Cube but that was changed in development to a service offered by the Blacksmith.[3][4]

In general, higher-quality items will provide more valuable and rarer salvage than lower-quality items. Only magical items (blue) or higher are salvageable. Below is a list of the currently known crafting materials for each difficulty level which can be found.

There are two means by which Artisans will be able to learn new crafting recipes: leveling and drops. The higher a particular Artisan's skill is, the more recipes they will be able to provide. In addition to this, many of the best recipes in the game will be obtained as random world drops from monsters, which can then be taken to the Artisan to learn. Crafted items will feature a number of pre-set bonuses, but will also come with a variety of random bonuses when created. Lead game designer Jay Wilson has said that the crafting system is a sort of evolution and combination of several systems present in Diablo II, namely runewords and gambling.