Armor is protective gear all characters wear to primarily increase their survivability, although these items can also spawn with offensive abilities to enhance a character's damage potential. 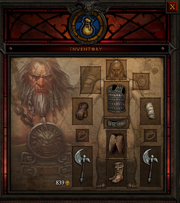 There are 8 different slots for equipping armor: helm, shoulders, chest, bracers, gloves, belt, pants and boots. Amulets and Rings, while not armor in the sense that they provide increased armor value, can also be equipped.

Each type of armor belongs to a tier, which denotes how powerful it is and what "visual set" it belongs to. Items of the same tier feature similar visuals. Shields provide by far the most defense, meaning that characters using one one one-handed weapon will receive a significant defensive bonus to offset their reduced damage potential.

Unlike in Diablo II where certain items, such as belts, provided non-stats bonuses such as how many potions one could wear or how fast Stamina drained, no armor piece provides any additional bonus or detriemental effect other than what is listed as its stats.

The class-specific items above have slightly lower defense values than their non-exclusive counterpars. It's not known why at this point. There are also no defense values for Mojos, Orbs or Quivers, since these act more like secondary weapons rather than shields.

It has been stated that, because of automatic stat allocation present in Diablo III, all armor and weapons available to your class will be possible to equip without prerequisites. The only factor in choosing which armor piece to equip is the level requirement. Characters will still wish to choose gear suited towards their class in terms of attributes and affixes, however.

Items in Diablo III have durability. The Blacksmith originally had a repair interface, but was removed in a beta patch as part of an undocumented change. The repair interface was instead attached to vendors. Blizzard's reasoning for this was to encourage players to visit the vendors. Needs citation

Originally Blizzard didn't plan to introduce durability into the game, but has since changed their minds. The exact reason is unknown, but might be to provide the game with an additional gold sink. Also repair prices due to durability loss have been modified through patch 1.0.3. in order to be higher in inferno. The reason behind this increase is to discourage dying multiple times and still come back to kill the same pack (thus and the enrage timers that will disappear with patch 1.0.4). It a character check - if you die multiple times you are made aware through high repair costs that you are doing something wrong - either in the use of skills or in the character gear chosen.

There are 18 armor tier levels. Each tier is more powerful than the next and sports a different set of visuals. At the start of the game the player only has access to the first tier from monsters and shopkeepers, but as the player progresses further monsters start to drop inceasing levels of gear.

While Diablo II had some changes to armor appearance for each character, Diablo III has far more distinct armor variations. Every character lends a very distinct look to the armor they equip, with the same piece of armor having an entirely different appearance when equipped by another class. This is separate from the different armor tiers, which also have their unique looks.

For example, if a Witch Doctor equips a piece of Archon Armor, he might be wearing a more elaborate and heavier piece of ritualistic voodoo garb. If a Barbarian equipped the same piece, it would instead appear as heavy plated armor. Blizzard has said that they want each character to look distinct and that armor is a big part of that. Visual style changes to armor will be consistent across drop appearance on the ground, inventory icon, and in-game model. Also the appearance will be slightly different inside the same character class between male and female heroes.

Armor Dyes as shown at Blizzcon 2010

Players will be able to dye their armor in Diablo III. Dyes are obtained via purchase, crafting, or looting from slain enemies. There are currently about twenty different colors players can choose from, with varying rarities. "Crimson Red" was used as an example of a rare dye multiple times at Blizzcon 2010 in the Crafting Sanctuary Panel and Open Q&A Panel.