The Areas in Diablo I are all accessed from the town of Tristram. The original four are all accessible through the Horadrim Cathedral, while the two areas added in the Hellfire expansion are separately placed. Each dungeon consists of four levels with new and more difficult enemies located further down.

In the original game, there are a total of sixteen levels divided between four differently themed dungeons: the Cathedral, Catacombs, Caves and Hell. In order to reach the Catacombs, the player must first pass through the Cathedral. Spread across all these levels are a total of 16 quests (not spread evenly) and a multitude of unique monsters and bosses such as the iconic Butcher. All of these quests and bosses are optional (up until the Archbishop Lazarus quest) and in order to progress the player simply has to find the stairs to the next level.

The two levels introduced in Hellfire are the Nest (informally known as the Hive) and the Crypt. The former is of similar difficulty to the Caves, the latter to Hell. Unlike the original dungeons however, these do not feature any additional quests and only one new unique, Na-Krul, at the bottom of the Crypt. They do have a variety of new monsters though. 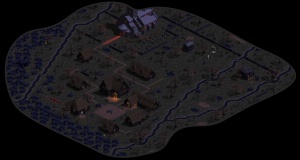 The town of Tristram