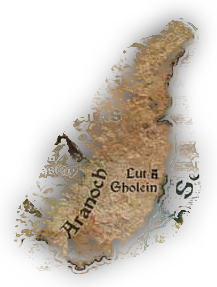 The Aranoch is a desert that lies between the Western Kingdoms and Kehjistan in the East.

The land is barren, and those who live there mostly inhabit Lut Gholein, the port town on the eastern shore. However, a few nomads also live in the desert and its subterran cave systems.[2]

Other than humans, the lacuni, also known as panther men (in Diablo II, Sabre Cats), also call this vast desert home.[3] These people can also be found in the East, in such desert regions as the Desolate Sands and surrounding areas.

On some natural pillars far out in Aranoch are etched the Netzem Petroglyphs. It is not known where they came from, but when Leah approached them, she began to have violent visions of Hell.[4]

Lut Gholein sits on the eastern-most coast of the Western Kingdoms, on the Twin Seas, and is valued as a major trading center between the East and the West. It is comprised of mud-brick buildings and a palace reminiscent of a mosque. The city was built over an ancient Vizjerei fortress, which explains the presence of the Arcane Sanctuary entrance in the cellar below the palace. It also features a complex series of sewers along its dockside.

"The great Vizjerei Summoner, Horazon, made his lair beneath the sands of Lut Gholein. Seeing Demons as deceptive and cunning adversaries who deserved to be enslaved and tormented, he honed his abilities to control them as completely as possible. His prowess as a powerful Summoner is well documented, but Horazon secretly feared that the Lords of Hell would punish him for enslaving their brethren. The creation of his Arcane Sanctuary was an attempt to keep opposing mages, inquisitive thieves and even lesser Demons confused and far from his summoning circle. The Summoner believed that he could bend Evil forces to his will. What he didn't know was that Evil uses man, not the reverse..." -- Diablo II[5]

In Legacy of Blood

For however clear the purpose and creation of the Arcane Sanctuary seems in Diablo II, Legacy of Blood's confusing and differing descriptions may be a clear example of how official game lore and book lore has differed over the years. One such example can be found in the following quotation:

"At one point he had spoken of having discovered by accident the Arcane Sanctuary - the name by which legend called Horazon's tomb - then he had told Kara that he had built it all by himself through masterful sorcery. Another time, Horazon had told his prisoner that he had come to Aranoch to study the massive convergence of spiritual ley-lines centered in and around the city's present location. Even she had heard that mages could tap the mystical energies of this region far better than in any other spot in all the world." -- Legacy of Blood[6]

In this part of the story, a lady necromancer named Kara muses over the history of Horazon's Arcane Sanctuary. Notice the subtle differences: Horazon's pocket universe is referred to as his tomb, and then there is rumored confusion over whether Horazon created the dimension, himself, or discovered it as a naturally-occurring phenomenon and simply took it as his own.

Other differences occur when one compares the visual aethetics and phenomena of the Arcane Sanctuary in the book to how it is described in Diablo II. In the game, the Sanctuary is seen as void filled with stars--much like outer space--but with floating, Gothic buttresses and stone walkways, devised with sentry traps, magic portals, and twisting paths to confuse adventurers. However, in Legacy of Blood, the Sanctuary is a complicated realm consisting of an ever-changing, "living" clandestine mansion of sorts, with moving hallways, distorted interiors, and places where simple laws such as gravity are undone.

From the Diablo II Manual

THE GREAT DESERT OF ARANOCH

"The Tamoe mountain range, which lines the eastern border of the Western Kingdoms, acts as a natural barrier into these provinces. Although impassable in most areas, these mountains hold a vast and lush woodlands. These forests stand in stark contrast to the bleak wastelands lying beyond them to the east: the flat, unforgiving, sand-swept deserts of Aranoch.

Boasting one of the harshest climates in the world, the deserts of Aranoch claim the lives of many each year. Only the most robust and highly trained nomads survive longer then a few hours in this scorching environment. This vast desert land is mainly comprised of vast, empty tracts, punctuated with but a few specially adapted plants and trees. Water is a rarity among the sand dunes of Aranoch, with dry spells reportedly lasting for years. The climate of this desert ranges from life threatening heat during summer days, to dry frigid winds during winter nights.

Set on the western edge of the Twin Seas, the jewel city of Lut Gholein has actually prospered in the merciless environment of Aranoch. Most credit this to the city’s coastal location and strong sea trading ties with the kingdoms to the east and west. Although a few bands of nomadic people have found ways to survive in this hostile desert, most steer clear of these sandy wastelands.

The perilous nature of Aranoch’s unique and deadly environment is without equal. Few creatures could survive in habitats so unforgiving, but some hardy beasts have managed. Now twisted by the chaos brought about by the arrival of the Prime Evils, these unique beasts are fearsomely powerful." -- Diablo II Manual [7]