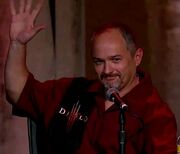 Alex Mayberry is the Senior Producer on Diablo III. Prior to working at Blizzard, he was the Executive Producer of the America’s Army project, and the Creative Director of the MOVES Institute at the Naval Postgraduate School in Monterey, California. Mayberry designed many custom maps for popular titles such as DOOM and Quake early in his career. He was then hired by Xatrix Entertainment where he served as Lead Level Designer and Game Designer, and would eventually come to work on various titles such as: Redneck Rampage, Redneck Rampage Rides Again, Redneck Hunting, Quake 2: The Reckoning, and Kingpin: Life of Crime. Alex was also employed as a Creative Director for Electronic Arts, where he worked on James Bond: The World is Not Enough.[1]